Hi, friends. Ghostbusters is one of the most iconic films of the twentieth century, and Bill Murray was excellent along with his co-stars in the movie. Aside from Ghostbusters, Murray has had several successes in his career. This post details two of his other films; though they are both well-received by critics, I only enjoyed one of them.

What About Bob? tells the story of a psychiatry patient, Bob, who becomes obsessed with his doctor; despite an eerie premise, the movie is funny because the doctor continuously gets angry with Bob while his family starts to like Bob. Bob is more quirky than creepy. This is my boyfriend’s favorite movie for good reason. 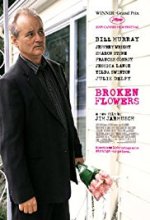 Whether we’re discussing paintings, poetry, or films, I’m usually dismissive of modernist, avant-garde art. I guess I just “don’t get it.” I barely remember the plot of Broken Flowers because it’s so boring, but my boyfriend says that Murray’s character goes on a journey to visit all of his ex-lovers. Murray was blasé, the storyline was blasé, everything was blasé. The minimalist aesthetic, particularly in this film, doesn’t appeal to me.

Thanks for reading! Agree or disagree? Do you have a favorite Murray film?

12 responses to “One Good, One Bad: Movies Starring Bill Murray”